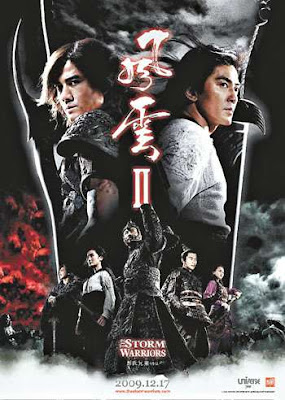 "Japanese evil warlord Lord Godless desired to conquer China. He imprisoned a large number of martial artists and tried to make them subjugate. Among the prisoners were Cloud and the martial expert elder statesman Nameless. Wind came to the rescue. The trio was badly wounded by Lord Godless evil martial arts attack and the remaining martial artists sacrificed their lives to save the trio. Cloud was filled with remorse and vowed to take revenge. Wind chose to take the evil way to quickly boost up his martial arts skills in order to defeat Lord Godless (Movie Synopsis: Golden Village website)."

I believe most of the Hong Kong comic fans know the movie. The movie plot is weak and it's more about martial arts fighting. Some parts of the plot were not explained. For instance, why Wind wanted to steal the Dragon Bone and where was Heart after destroying the Dragon Bone? I found the two female actors were kind of "extra" in the plot since it focused more on male actors. I think the background could be more realistic if the Pangs could take some street scenes rather than hills or forest (may be these were originated from the comic). Despite the above, the visual effects of all martial arts attacks are superb and spectacular. I like the part when Cloud fought with Lord Godless at Dragon Tomb. The armoured suit of Lord Godless is impressive. By looking at the ending, it's obvious there would be a sequel in the future. Anyway, I still would get the movie on DVD as I always love action packed movies (Overall Movie Rating: 3/5). If you are an audience who always consider movie plot before action, this is not the movie for you.
Posted by deSMOnd

I heard it is pretty bad. Will wait for your review before I decide to catch it...:)

That what I heard too. will wait for your review tho.

Not sure to watch at cinema after all the negative review. No matter how, I will still watch it's either now or wait for the DVD.

Adrian and Leon, this is a MUST see movie if you love visual effects of martial arts fighting and lots of action. Otherwise, you can wait for DVD or download from the web :)

Dennis - I suggest you to watch it in big screen if you like visual effects of those martial arts attacks. They were spectacular!!

Saruman - Relax and why so serious..Haha!! Despite the bad storyline, I think the visual effects and action were fantastic, right?

I saw this sequel during the weekend. There wass too much focus on "artisic" martial arts moves and little focus on the plot. And didn't the new villain had a younger son too? He wasn't portrayed in the sequel The first movie was way better.

Juliana, I didn't really read the comic before. So, don't know if Lord Godless had a second son. Anyway, you are right. The plot of first instalment is better. But, I like the visual effects of the current instalment. It's spectacular!!

desmond I would suggest you pick up the old comic and read. If you have read the comic, your view for this movie may change...

Leon, I know what you mean. But I am only interested to read Dragon Tiger Gate as that is my only favourite HK comic even till today :P