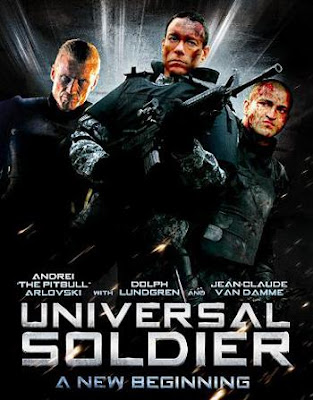 "Reactivated to do battle with terrorists who have taken over the Chernobyl nuclear reactor, Universal Soldier Luc Deveraux (Jean-Claude Van Damme) comes face to face with a more powerful upgrade of his former adversary Andrew Scott (Dolph Lundgren) in this action packed sequel. Using stolen technology to transform a fearless fighter (Andrei "The Pit Bull" Arlovski) into an unstoppable force of destruction, a rogue militia holds the world hostage by threatening to blow up Chernobyl. The prospect of a peaceful resolution to the ordeal fading, the decision is made to reactivate Luc Deveraux, and send him in. But Deveraux isn't the only decommissioned Universal Soldier to be resurrected; his old nemesis Scott is back in action, too - and stronger than ever before. Now faced with the prospect of battling not one but two powerful Universal Soldiers, Deveraux braces himself for a fight he might not walk away from (Movie Synopsis: Fandango)."

There is no doubt Van Damme and Lundgren are old. But I still enjoyed when seeing both of these movie stars back in action. The plot was simple and predictable with plenty of action. Surprisingly, the moves of the new character who is played by Andrei Arlovski were great. He is tall and his punches are fast. While watching the movie, it brought my memory back to the 90's where its first instalment released. Of coarse, all gunshot and fight scenes did not disappoint me. Even if this is a low budget film, I must give credit to Van Damme and Lundgren as I believe they gave their best to make this sequel the same kind of success the first instalment did (Overall movie rating: 2.5/5).
Posted by deSMOnd

I enjoyed it and like I say it before, it's nice to see these 80's stars back together again for this sequel.

Agree with you bro. I guess we are more or least the same loyal fan for the 80's and 90's movie stars.