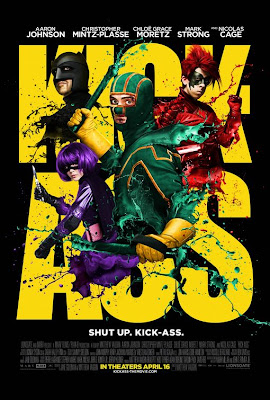 "A twisted, funny, high-octane adventure, director Matthew Vaughn brings KICK-ASS to the big screen. KICK-ASS tells the story of average teenager Dave Lizewski, a comic-book fanboy who decides to take his obsession as inspiration to become a real-life superhero. As any good superhero would, he chooses a new name - Kick-Ass - assembles a suit and mask to wear, and gets to work fighting crime. There's only one problem standing in his way: Kick-Ass has absolutely no superpowers. His life is forever changed as he inspires a subculture of copy cats, meets up with a pair of crazed vigilantes - including an 11-year-old sword - wielding dynamo, Hit Girl and her father, Big Daddy - and forges a friendship with another fledgling superhero, Red Mist. But thanks to the scheming of a local mob boss Frank D'Amico, that new alliance will be put to the test (Movie Details: Golden Village website)."

Initially, I thought Kick-Ass was a comedy film. After watching the first 30 minutes, I realized it was not. The movie was an action comedy with strong violence. It was bored in the beginning but exciting after that. I personally think the fighting scenes were quite similar to those in “Watchmen”. The costume of “Big Daddy” (played by Nicholas Cage) looks like the classic Batman’s costume while Kick-Ass’s costume looks like a fool to me. Surprisingly, I was impressed by the action performance of that young female actor “Chloe Moretz” as “Hit-Girl” in the movie. She was very well trained as all her action moves were amazing. It was also sad to see “Big Daddy” died. The ending revenge part was great and that was the part I enjoyed the most. If there is a sequel, I guess “Red Mist” might be the next villain. Anyway, the movie went beyond my expectations and my overall movie rating is 3/5.
Posted by deSMOnd

Cowboy75, you can watch this movie..it's fun with action packed :)

I saw this movie! Hit Girl and the young actress who played her are indeed amazing! The action sequences of this character alone are worth your ticket money! :D

My colleague brought up the topic about this movie 2 days ago and I know nuts about it. I should read your posting earlier so I could keep the ball rolling. Ha! Ha!

hm...over your expectation only give 3/5? :P I waiting to watch this movie in the near future...

Yes Juliana, I agree with you. If there were no big daddy and hit-girl in the story, I don't think the movie is enjoyable..

Dennis, this movie was still ok to watch and the actions were very violence :)

Yes Leon, initially I thought this was a stupid comedy show but ended up with action violence. This was really unexpected. I didn't give 3.5 because I was bored for the first 30 minutes and this is not fully action-packed. So, 3 out of 5 is the best I can give for this show :)