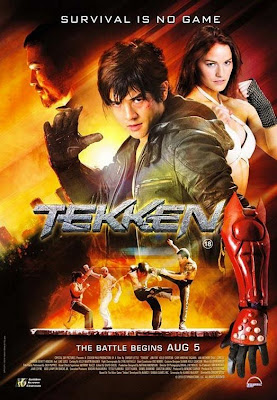 "Based on the fighting game series of the same name. The film follows rebellious teenage fighter Jin Kazama (Jon Foo) in his attempts to enter the Iron Fist Tournament to avenge the loss of his mother, Jun Kazama, by confronting his father, Kazuya Mishima (Ian Anthony Dale) and his grandfather, Heihachi Mishima (Cary-Hiroyuki Tagawa), the latters of whom he thought were responsible for her death. In the year 2039, after World Wars destroy much of civilisation as we know it, territories are no longer run by governments, but by corporations; the mightiest of which is the Mishima Zaibatsu. To placate the seething masses of this dystopia, Mishima sponsors the King of Iron Fist Tournament, or Tekken, in which fighters battle until one is left standing, who in turn will receive a lifetime of stardom and wealth. We are introduced to this violent world through the eyes of Jin Kazama (Movie Plot: inSing.com)."

Since this is a movie based on the famous video fighting game, I don’t expect it has good story line. The action is okay and nothing fantastic. No special effects from punches and kicks. Apparently, this is a low budget film. In the movie, Jin, Eddy, Bryan Fury, Raven, Nina and Anna resemble good likeness to the video game characters. But, they have very different personality when comparing the video game. Marshall Law, Kazuya and Steve Fox have no resemblance to the original characters at all. If you are a huge fan of Tekken, do not expect you will get the same story line from the game itself. The fights also took place in different decorated arena with fast paced background music. You are still able to see some characters perform a bit of their signature moves in the game. Surprisingly, Heihachi (played by Cary-Hiroyuki Tagawa) is a good guy in the movie (what?!). The only thing I like is the fighting moves of Jin (played by Jon Foo). I saw his real martial arts performance on You Tube (very impressive!!). His moves are fast and he has great potential in future action movies. Anyway, the movie is much better than "Street Fighter: The Legend of Chun Li" and "Dragonball Evolution". It is still entertaining and my overall movie rating is 2.5/5.
Posted by deSMOnd

Should be ok if better than "Street Fighter: The Legend of Chun Li" cos that movie to me is a big disappointment.

if it is better than Dragonball evolution and legend of chunli is ready a great improvement! LOL

Leon..overall, this is better than the two earlier movies mentioned here..