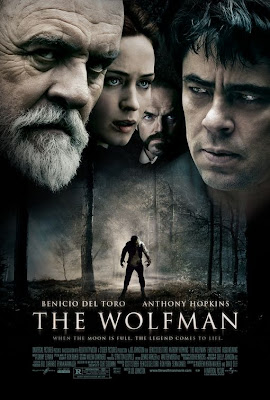 "Lawrence Talbot, a haunted nobleman, is lured back to his family estate after his brother vanishes. Reunited with his estranged father, Talbot sets out to find his brother... and discovers a horrifying destiny for himself. Talbot's childhood ended the night his mother died. After he left the sleepy Victorian hamlet of Blackmoor, he spent decades recovering and trying to forget. But when his brother's fiancée, Gwen Conliffe, tracks him down to help find her missing love, Talbot returns home to join the search. He learns that something with brute strength and insatiable bloodlust has been killing the villagers, and that a suspicious Scotland Yard inspector named Aberline has come to investigate...(Plot Summary: The Internet Movie Database)."

"The Wolfman" is a thriller movie. As I have never seen the original release before, it was "new" to me. The performance of the actors is good. They have the right actors for the right characters in the film, especially to Del Toro. He is suitable for "werewolf" character as he has the kind of look. The story line was weak and lacking. One part that made no sense to me - how could Del Toro establish a love relationship with his brother's fiancee "Emily Blunt" for such a short period of time? It's a bit ridiculous. There was a twist in the film. The visual and sound effects were great. Overall, the movie is "okay" but not a must see one (Movie Rating: 2.5/5).
Posted by deSMOnd

the movie's a bit boring tho.

Asrul, I guess you watched the movie, right?

I watched this movie already. The pace for the first half is very slow that it made me wait so impatiently for the "horror" parts to come. In the end, the "scary" factors were all ruined for me. I still prefer the "werewolves" from "Twilight". I like the original wolf look :)

To me, I can't differentiate which werewolf version is my favourite. In fact, this movie is not scary but a Thriller one. It has a lot of surprises that shocked you :)

I wasn't thrilled by this movie. The slow paced killed the thrilling part for me. I had plenty of time to figure out the ending on my own during the movie :P

Juliana, then I guess you didn't enjoy anything..Haha!!