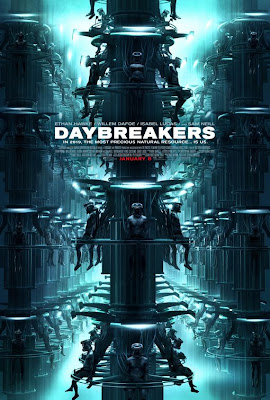 "The year is 2019. A mysterious plague has swept over the earth, transforming the majority of the world's population into vampires. Humans are now an endangered, second-class species forced into hiding as they are hunted and farmed for vampire consumption to the brink of extinction. Its all up to Edward Dalton, a vampire researcher who refuses to feed on human blood, to perfect a blood substitute that might sustain vampires and spare the few remaining humans. But time and hope are running out until Ed meets Audrey, a human survivor who leads him to a startling medical breakthrough. Armed with knowledge that both humans and vampires will kill for, Ed must battle his own kind in a deadly struggle that will decide the fate of the human race (Movie Details: Golden Village website)."

The idea of vampires taking over the world is nothing "new" to me. But the interesting part of the plot is more than 90% of the world's population is vampires and thus causing an extinction of human race. As expected, there are nobody walking around in the street during daylight and vampires come out in the night. The only twist that surprised me was there is a "cure" to the vampires and they could change back to the human race. We can expect a lot of bloody and violence scenes since it is a gory film. To me, "Daybreakers" is still entertaining and my overall movie rating is 2.5/5.
Posted by deSMOnd

where the vampire find their food then? they cannot be drinking everybody blood rite?

There is a big company that hunts for human kind and put them in the factory just like what you saw in the poster. Those machines will draw blood from the human necks until they died. Then the company sends the blood bags to outside stores and restaurants. Vampires in this movie are civilised like normal human lifestyle. They work and get their salary. They buy and drink coffee that mixed with blood. The only difference is the vampires sleep during daylight.