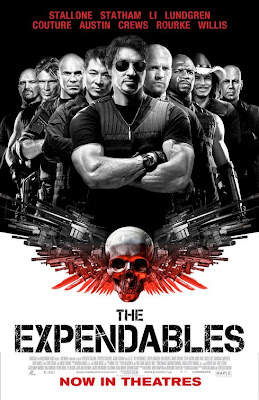 "Fearless Barney Ross (Sylvester Stallone) is leader of a tight-knit band of men - Lee Christmas (Jason Statham), ex-SAS and skilled with any bladed weapon; Yin Yang (Jet Li), a close combat master; Hale Caesar (Terry Crews), a long-barrel weapons specialist; Toll Road (Randy Couture), a skilled demolitions expert; and Gunnar Jensen (Dolph Lundgren), a veteran in precision sniping. When the mysterious Church offers Barney a job no one else would take, the team embark on what appears to be a routine mission: overthrow General Gaza (David Zayas), the murderous dictator of the small island country of Vilena. There, Barney and Christmas meet Sandra (Giselle Itie), a local freedom fighter with a dark secret. They also learn the true enemy - rogue ex-CIA operative James Monroe (Eric Roberts) and his henchman Paine (Steve Austin). When things go wrong, Barney and Christmas are forced to leave Sandra for dead. Haunted by this failure, they return to Vilena to finish the job they started (Movie Plot: Yahoo! Movies Singapore)."

"The Expendables" is definitely an action packed movie. The film was a lot better than I expected. Though the plot was old-school type, it was fine with me. There were lots of jokes between the good guys and I laughed throughout the entire show. Looking back to the action scenes, they brought me back to the action movies of the 80s by Stallone – "Rambo" franchise. There were tons of combat scenes, gunshots and explosions in the movie. Jason Statham’s moves were fast and fierce. I believe he will be the next action superstar in future. On the other hand, Jet Li and Dolph Lundgren had less action this time round. I guess Mickey Rourke loves his image in "Iron Man 2" as he kept the same hair style in this movie. I think Arnold Schwarzenegger and Bruce Willis were the guest stars here as they only appeared in the screen around 5 minutes. The former WWE superstar "Steve Austin" played as a villain and he was very tough. Lastly, I want to give compliments to my favourite action hero "Sylvester Stallone". Though he is in his mid 60, his punches and kicks were fast and powerful. His overall performance was still great. I enjoyed the movie very much especially the final battle between the good guys and the baddies. For my overall movie rating, I give a 3.5 out of 5 with Two Thumbs Up!! Looking forward to get the DVD soon :P
Posted by deSMOnd

action i give it full marks man hahaha! sylvester stallone rocks! why stone cold be bad guy inside :(

Yes Jason, the movie rocks and Stallone is still able to kick some ass in his current 60. Austin played as a villain as he really looks like a bad guy. In addition, there were not many bad guys in the movie :)

Thanx for the recommendation. I will watch this movie for sure on the big screen. Power house action casts! Seeing them is already worth the money.

Yes Dennis, it is a must watch action movie this year..Enjoyed it bro :P

Ya Jason, I will get all three figures released from Hot Toys :)

3 figures? i thought only stallone leh. jason and jet also include?