The King of Fighters 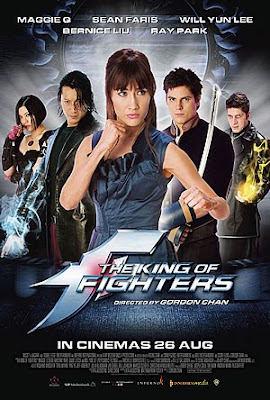 "If you're lucky enough to be invited to the secret King of Fighters tournament you get an earpiece. When it rings, you answer. When you answer, you're gone - you step out of time and space and into another place: the Tournament Dimension. Everything is heightened there, the colors, the textures, your own abilities - not to mention those of your challenger. The first fighter in chooses the setting, so you better be ready because he'll always choose to his advantage. If you win, you move to the next round. And if you're skilled enough to be the last one standing, you become "The King of Fighters." But beware. Because something else also lurks in the Tournament Dimension: the Orochi - an evil force trapped centuries ago by three ancient Japanese clans. All you need to do is touch it to become far more powerful than any other fighter. But this power comes with a price. Once the Orochi gets a hold of you it never lets go, and given sufficient time, it will drive you mad and use you as an anchor back to this dimension to destroy life as we know it on earth."
(Synopsis: Moviexclusive.Com)

I wonder how the film makers got the video game licence. They didn't show any sincerity and efforts at all. Did you ever see Kyo Kusanagi used samurai sword in the video game series? In the movie, the image of Iori Yagami and Terry Bogard was suck..I believe there are many good Asian actresses who can speak fluent English, why did they select Maggi Q as the female lead? Furthermore, she doesn't have "assets" to play the role of Mai Shiranui. Those people didn't even try to make and follow the characters' costumes. How much money to make those costumes only? I normally don't expect good plots from the video game movies. But this one made me fell asleep..Just imagine how bad the story is..Lastly, I just wanted to say if you (film maker) are not sincere to make a good film, PLEASE don't waste your resources to get the licence..You are such a spoiler!! Do you know that?? (Overall Movie Rating: 1.5/5).
Posted by deSMOnd

expected bro... Have to give you credit to pay the money to watch it. LOL

I saw this movie and I won't recommend it to anyone. The plot lacks excitement and the actors have little chemistry among themselves that don't make me eager to watch on for any plot or action :(

Leon, I am a movie addict. This one was worse than I expected :)

Juliana, I agree with you. I fell asleep when halfway through. The characters are totally out of the video game. Anyhow looked for people (not suitable) to play the role of the game characters and not willing to spend those characters' costumes. No sincerity from the film maker. Very disappointed!!

i'm a movie addict as well, but totaly pass on this movie cause it looks cheap. Can't believe Maggie Q in it.

Asrul, I believe Maggie Q is not popular anymore..