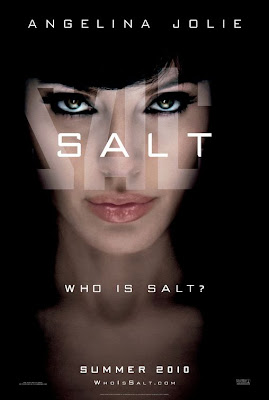 "As a CIA officer, Evelyn Salt (Jolie) swore an oath to duty, honor and country. Her loyalty will be tested when a defector accuses her of being a Russian spy. Salt goes on the run, using all her skills and years of experience as a covert operative to elude capture. Salt's efforts to prove her innocence only serve to cast doubt on her motives, as the hunt to uncover the truth behind her identity continues and the question remains - Who Is Salt?"

Watched the movie when I was in Penang early this month. It was a fast paced movie with tons of action. As the story had lots of twists and turns, it kept me guessing most of the time. Angelina Jolie looked skinny this time round and her acting performance was great. I also believe she put lots of effort in practising her fighting skills as her moves were fast and convincing. Though some action scenes were unrealistic e.g. the one jumping down the elevator, I still enjoyed it. Anyway, why so serious?? just sit back and relax!! (Overall Movie Rating: 3/5).
Posted by deSMOnd

Asrul, agree with you but I notice that HT is not very good in producing female figures :P