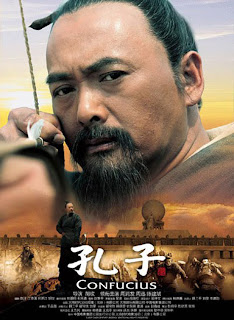 "Confucius" tells about Confucius' transformation from an ordinary bookkeeper to a philosopher and a sage. It follows his long journey around small kingdoms in northern China preaching his beliefs, and his 72 disciples (Movie Plot: Yahoo! Movies Singapore)."

"Confucius" is a slow paced movie. The movie plot focused on the portrayal of Confucius's life journey who lived in the "Spring And Autumn Period". I have no doubt about the acting performance of Chow Yun Fat. He was really great in portraying this iconic man in the Chinese history. The way Confucius carried himself and the way he talked really showed he was a man of great wisdom. Confucius would not lose his composure whenever he faced difficulties. He was a great thinker too. The female lead "Nan Zi" was the only character I don't like. I personally think "Nan Zi" who played by Zhou Xun was very "extra" in the story. In fact, is Nan Zi a "created" character in the story or the "real" concubine of the Wei Kingdom in that period? Although it is a biographical film, we got a quick view of how China was like during the period. There were some emotional scenes in the ending. Surprisingly, I was not bored throughout the movie even if there were not much action scenes. Overall, I enjoyed the movie and my rating is 3/5.
Posted by deSMOnd

Bro, I have watched it already but just didn't have the time to write the review.

Thought the dvd had already been released the same time. I put my money watching 'Green Zone' that day.

heard mixed review but mostly toward the disappointed side. will wait for your review.

Ya Dennis, I only know the dvds were out in the market after watching it in cinema. Waste my money on that. But overall, the movie is still ok to watch..average!!

Leon, will do a simple one..Nowadays very lazy to write reviews :)