Legend of The Fist: The Return of Chen Zhen 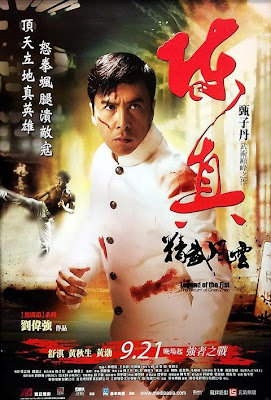 "A continuation of the 1995 television series Fist of Fury, Donnie Yen reprises his role as Chen Zhen, a role made famous by Bruce Lee in "Fist Of Fury" (1972). The film is set seven years after the apparent death of Chen Zhen, who was shot after discovering who was responsible for his teacher's death in Japanese-occupied Shanghai. A mysterious stranger arrives from overseas and befriends a local mafia boss. That man is a disguised Chen Zhen, who intends to infiltrate the mob when they form an alliance with the Japanese. Disguising himself as a caped fighter by night, Chen intends to take out everyone involved as well as get his hands on an assassination list prepared by the Japanese (Movie Overview: Yahoo! Movies Singapore)."

The story is lacking and a little confused as it consists of romance, brotherhood, betrayal and politics. I feel that the director focused too much on the dramatic scenes especially to the love story between Donnie Yen and Shu Qi. I guess most audiences would prefer to see more action from the male lead. I also wonder why Donnie wanted to mimic Bruce Lee’s fighting moves when he fought with an entire dojo of Japanese students. I believe his unique martial arts were good enough already. As for the final fight between Donnie and the Japanese Boss, it was too short. Talking about my favourite part of the movie, it was the beginning when Donnie killed those enemy soldiers in the European war. Donnie’s fast and furious moves were again delivered in this movie. As for Shu Qi, she is hot and sexy, and her performance is great. Despite to the negative comments above, the movie is still enjoyable especially to the fighting scenes. Don’t miss it if you were a fan of Donnie Yen (Movie Rating: 3/5).
Posted by deSMOnd

not a fan of the movie but still like Donnie yen and the fighting scenes.

I saw the movie this week and the fighting scenes were quite violent like the Yip Man movies. But overall it's an enjoyable movie to watch due to the exciting action scenes :)

I will most probably watch this. I love the moves of Donnie Yen. Definitely one of those worth watching martial art stars of recent years.

Ya Juliana, agree with you. The punches and kicks are fast and breathtaking..Glad that you watched it too :)

I know you will watch this movie, bro!! Enjoy man!!

tonight i am going to watch it :P