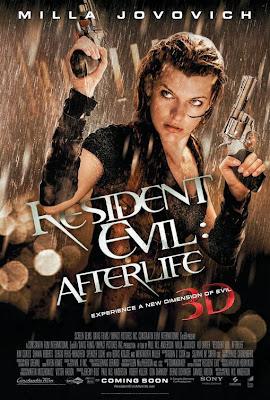 "In a world ravaged by a virus infection, turning its victims into the Undead, Alice continues on her journey to find survivors and lead them to safety. Her deadly battle with the Umbrella Corporation reaches new heights, but Alice gets some unexpected help from an old friend. A new lead that promises a safe haven from the Undead guides them to Los Angeles, but when they arrive the city is overrun by thousands of Undead and Alice and her comrades are about to step into a deadly trap (Movie Plot: inSING.com)."

The story was straight forward and it continued from "Resident Evil: Extinction". The female lead, Alice (played by Milla Jovovich) continued to look for survivors and brought them to safety. The supporting actress "Ali Larter" as Claire Redfield was sexy and she was able to fight too. The performance of Wentworth Miller as Chris Redfield was great but not much action from him. The visual effects were good with tons of gunshot scenes. There were also lots of slow motion scenes just like the one in "Matrix" but nothing special about that. I like the battle scene between the giant Zombie and Alice with Claire as it was exciting. The ending indicated there will be a sequel in future. Overall, the movie was entertaining and my rating for this installment is 3/5.
Posted by deSMOnd

I wish that I like this movie since i'ma HUGE fan and LOVE all the series, except this movie.
It lacks of zombiness - maybe.

But i'm excited for Jill tho.

Yes Asrul, this installment is not focused on Zombies. It was more on the bad guy, Albert Wesker..Haha!!

sorry this movie really didn't do it for me...& I'm a fan of the series & Milla Jovovich some more...

Is it?? Jason as I never play its video game series before :)

actfigman, it's okay as different audience got different views and prospectives..Haha!!

I'm more of a fan of the actress. The zombies were hideous while the action scenes are enjoyable to watch, like in the previous installments :)

Juliana, I think this installment focused more on the zombie boss "Albert"..Those zombies were less showing out in the screen :P