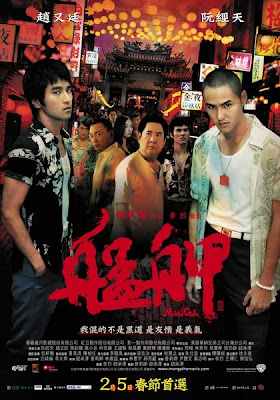 "Starring the top two male idols in Taiwan today, Ethan Ruan and Mark Zhao, Monga is Taiwans blockbuster of the year which tells the story of five boys from the historical district of Monga in Taipei, who join a gang because they were tired of being bullied around.

As the young men enjoy their newfound status as gangsters in Monga, they have no idea that other gangs have also set their eyes on this prosperous area. Under the guidance of a veteran gangster, the youngsters are taught the heritage created by the founders of the borough of Monga. He has no idea, however, of a storm brewing that will soon break every hint of order in town, and remove the last remaining grandeur of the Old Town Monga (Movie Details: Golden Village website)."

The story line was great but a little draggy in some parts of the film. Surprisingly, the acting performance for both Taiwan idols "Ethan Ruan" and "Mark Zhao" was good. A movie focused on brotherhood and all fighting scenes looked very realistic. A lot of dialogues were in Taiwanese Hokkien but luckily we have mandarin subtitles. While watching the movie, we got a quick view of how Taiwan gangsters were like in the 80's. Besides romance scenes, there were some emotional scenes in the ending. Overall, this is a movie you may not want to miss it (Movie Rating: 3/5).
Posted by deSMOnd

I like the way how they portray the 80s era. I like the starting in school days but toward the ending was not so exciting as I expected.

the actors look to pretty to be gansters tho. hohohoho

Yes Leon, the beginning was good. The middle part focused on the new gang who wanted to take over the place. The ending part surprised me as I thought 5 of them will work together to fight against the new gang to stop them for invading their territories. But ended up the boys fought against each others and two main characters died in the end. A bit sad to see the ending..