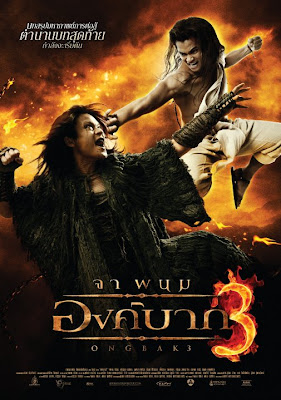 "The legend of Ong Bak 3 begins after Tien (Tony Jaa) has lost his fighting skills and his beloved stepfather at the Garudas Wing cliff from the raid led by Jom Rachan (Saranyu Wonggrajang). Tien is brought back to life with the help from Pim (Primrata Dechudom) as well as Men (Petchtai Wongkamlao) and the Kana Khone villagers. Deep into the meditation taught by Phra Bua (Nirutti Sirijanya), Tien finally is able to achieve Nattayuth. His talents are put to the test again when his rivals including the Golden-Armoured Kings Guard (Supakorn Tok Kijsuwan), the mysterious killers in black, and Bhuti Sangkha (Dan Chupong) return for the final massive showdown (Movie Details: Golden Village website)."

The story line was so-so only. Not so much of fighting scenes but more romance this time round. There were some comedy scenes in the story as well. The story also focused more on Tony recovery after being saved by some good guys. In this sequel, Tony performed purely Thai martial arts. Unlike in Ong Bak 2, he performed a mixture of martial arts. However, Tony fighting styles were great. His punches and kicks were always fast and fierce. But the ending was a disappointment as the villain was too easily defeated. Anyway, the fighting scenes were still enjoyable and my rating for Ong Bak 3 is 3/5.
Posted by deSMOnd

the 2nd movie is a bit scary. and that chick's a bad ass

Bro, the 2nd movie was fully action packed but this one is packed with action, romance and comedy..

I didn't watch part 2 and so will give this a miss. But I seriously think Tony fought great in part one.

Yes Dennis, I like him in Ong Bak and Tom Yum Kung. My favourite Thai action movie :)