Ip Man - The Legend is Born 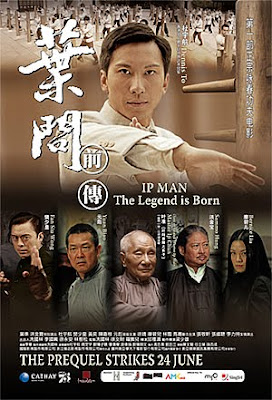 "This is a semi-biographical account concentrating on the childhood and teenage hood of IP Man, the first martial arts master to teach the Chinese martial arts Wing Chun. From this period of his life you could find out how IP has finally turned to such a famed icon of this martial art. Indeed this folk hero was under huge influences from his two kung fu masters CHAN Wah-shun and LEUNG Pik when back to his junior age. Therefore their master-disciple relation takes up quite a significant portion in this movie. Another person that we shouldn’t miss out when we talk about IP Man is his step-brother IP Tin-chi, who’s discovered by IP Man that he’s an undercover assassin sent by the Japanese army.

It is the idea of SIN, the producer of IP MAN series, to shoot this prequel so he could go into the essence of this Chinese kung fu. To SIN and LEUNG’s credit, they have intricately designed some of the most varied martial arts sequences in the movie to show some rarely seen Wing Chun techniques, e.g. leg work and wrestling. If you are hungry for more vivid and vigorous actions, the must-see scenes are the several combat between real-life professionals competing in Wing Chun with different kinds of martial arts, such as Brazilian Jiu-Jitsu, Karate and Boxing, etc (Synopsis: Moviexclusive.Com)."

It was a prequel to describe the early life of Ip Man. The plot was okay with lots of action. There is no doubt Dennis To Yu Hang (as the young Ip Man) can fight but lack of some "X" factors. However, this shouldn’t be any problem for a young actor if he works very hard towards his future career path. In the movie, I was surprised "Wing Chun" could be modified in other forms e.g. low kick to high kick techniques, because we normally didn't see that in other Ip Man movies. I was also happy to see Yuen Biao in action again as he has not been in the big screens for many years. One thing I am very sure real Ip Man had no adopted brother "Ip Tin Chi" as he should be an added character by the filmmakers. Overall, the movie was enjoyable and my movie rating is 3/5.
Posted by deSMOnd

i watched this on wednesday :P

I watched it on Wednesday as well. The action was fairly good with lots of comedy in the movie :)

I watched it on Tue. Quite a nice movie and the lead actor does resemble the older Donnie Yuen version a bit :)

Look forward to your review and I might want to watch.

hehe yeah des, i like the plot more in this. but action i more like ip man 2. enterbay has painted ip man headsculpt! very nice >.<

Yes Juliana, the male lead is much taller and he is a martial arts champion :)

Dennis, go to watch first..Good movie..I am quite busy now and have only little time to blog :P

Jason, agree with you. This plot is still ok and action style definitely credit to Ip MAN 2 :)

Glad that you enjoyed the show bro!!