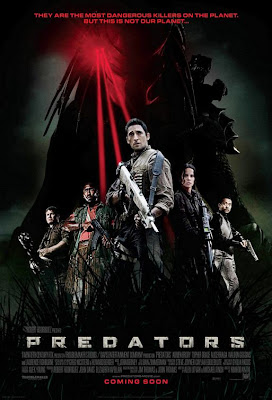 "PREDATORS, a bold new chapter in the Predator universe, shot under the creative auspices of Robert Rodriguez, stars Adrien Brody as Royce, a mercenary who reluctantly leads a group of elite warriors who come to realize they've been brought together on an alien planet as prey. With the notable exception of a disgraced physician, they are all coldblooded killers mercenaries, Yakuza, convicts, death squad members human predators that are now being systemically hunted and eliminated by a new breed of alien Predators (Movie Details: Golden Village website)."

The actors were great and most action scenes were exciting. The plot was weak as I think the filmmakers just "anyhow" copied ideas from the first movie and dumped it here. I found Noland (played by Laurence Fishburne) was an "extra" character in the story as he only appeared in the screen for less than 15 minutes. The ending implied there will be a sequel in future. Furthermore, we still don't know who was behind this. The new type of predators seem less powerful than those in other instalments. But, I like the "fierce" look of Berserker Predator in the movie. Overall, it was entertaining and my movie rating is 3/5.
Posted by deSMOnd

Wanted to watch this movie but need to attend to my newborn these few days. Hope the movie will not stop showing too soon.

yo des, i've watched predators too. the plot not enough nice but action is awesome :) anyway you got PO berserker predator?

Jason, I am considering to get the berserker predator..need to see the actual figure first :P