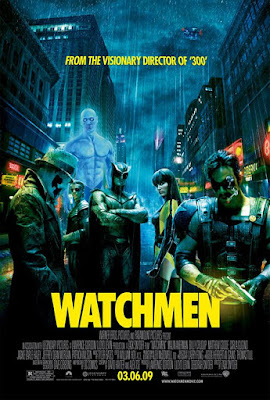 "Set in an alternate 1985 America where tensions between the United States and the Soviet Union are high and the Doomsday Clock is set at five minutes to midnight, former superhero turned vigilante Rorschach discovers that one of his former colleagues has been murdered. As he investigates the murder he uncovers a plot that is intent on killing and discrediting all past and present superheroes. As he reconnects with members of his former crime-fighting legion, including Nite Owl II, Silk Spectre II and Dr. Manhattan, they uncover a wide-ranging and disturbing conspiracy that not only links to their shared past but has catastrophic consequences for the future (Synopsis from Wikipedia)".

As I never read the graphic novel before, I am a bit confused with some parts of the story. Even with Mandarin subtitles, I still feel stressful when trying to figure the dialogues out. The only enjoyable parts to me are those fighting scenes (warning: bloody violence). Anyway, it’s a 165 minutes show with 65% talking and 35% action. It’s also not advisable to bring along your kids as there is a lot of "nu-di-ty" in the film. Overall, my rating for this one is 3/5.
Posted by deSMOnd

I have watched the movie yesterday..Overall is ok :)

Ya Marcus, this is an adult movie :P