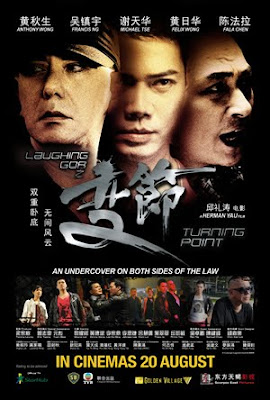 "Before Laughing (MICHAEL TSE) becomes a police undercover, he works under triad leader Yi (ANTHONY WONG). Yi treats Laughing as his own brother, however to protect his territory and illegal businesses, Yi requested Laughing to join the police force and act as his undercover. But Laughing never got a chance to join the force because he is specially picked by Inspector Xian (YUEN BIAO) to be an undercover in the underworld syndicate. Hence Laughing becomes a “double-undercover” (Synopsis extracted from Moviexclusive.Com)."

"Laughing Gor" is definitely a popular character in the recent TVB series "Emergency Unit". To me, "Turning Point" is more like a TV-Movie. The plot is straight forward and it is obviously the prequel of how Laughing became a police officer and later joined the underworld syndicate as a police undercover. Nothing great from the plot and just talking about "undercover" kind of stuff. Besides Anthony Wong, Francis Ng and Eric Tsang, most of the supporting actors and actresses are from TVB. If you guys had watched the drama series EU, you may like it. Anyway, it's still entertaining and my overall movie rating is 2.5/5.
Posted by deSMOnd