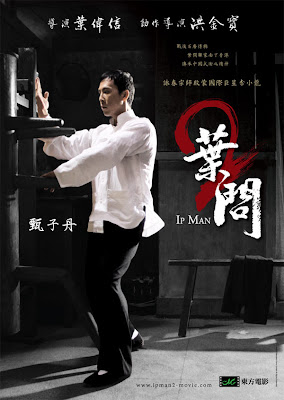 "Ip Man arrives in Hong Kong and tries to propagate Wing Chun in the region. He faces rivalry from the local master of Hung Ga, Hung Jan Nam. After a few encounters with each other, Hung begins to respect Ip's existence.

One day Hung is beaten to death by an English boxer during a duel. In order to protect the dignity of Chinese martial arts, Ip challenges him (Movie Details: Golden Village website)."

"Ip Man 2" has proved to be a great sequel to "Ip Man". To me, the current story line is average. But Ip Man 2 continues to deliver the best martial art actions. The sound effects and action moves from the fight scenes made me focused and enjoyed. The best part is definitely the fighting scene between Donnie Yen and Sammo Hung. Some parts of the story were humorous and some were emotional. The action scenes were realistic for examples, the fight between Sammo Hung and the English boxer as well as the ending with Donnie Yen. In this movie, Donnie Yen was knocked down several times. It implies that "nothing is impossible" in the real world. One thing I am curious is how Donnie Yen is able to execute "Wing Chun" martial arts in such a fast speed. I guess this may be due to the in-born talent that Donnie Yen has. Surprisingly, Sammo Hung was also able to execute fantastic moves as he is currently 58 years old. Anyway, this is a must watch movie and I highly recommend it to all my friends out there. My overall movie rating is 3.5/5.
Posted by deSMOnd

I have been hearing good review. Will catch it soon I hope.

Mr Lonely, thanks for dropping by and you have a nice blog as well :)

Leon, this is a must watch movie and I am sure you would enjoy it very much :P

Thanks for the review! I'm going to watch this movie sequel too. It's either this one or Iron Man 2 for me this week! :)

Juliana, I believe all cinemas in Singapore will be filled up by Iron Man and Ip Man fans for this entire week :)

I want to watch! It's either tomorrow or Thursday!

hehe nice2. i watch it last friday :) this movie very enjoy for me. especially the fighting scene @ fish market, battle with all sifu and the last battle with twister as well. very nice representation overall. great movie =)

Dennis, hope you enjoy it too :)

Jason, glad that you enjoyed the movie and hope there will be more coming chinese martial arts films similar to this :P

when enterbay will release ip man 12"? T_T any information for this?

Bro, go ahead if you enjoyed the show :)