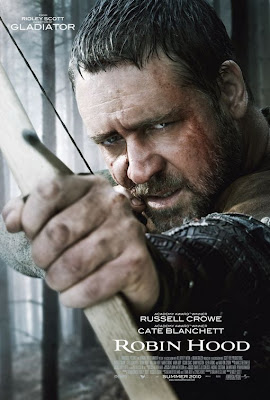 "Robin Hood chronicles the life of an expert archer, previously interested only in self preservation, from his service in King Richards army against the French.

Upon Richards death, Robin travels to Nottingham, a town suffering from the corruption of a despotic sheriff and crippling taxation, where he falls for the spirited widow Lady Marion, a woman skeptical of the identity and motivations of this crusader from the forest. Hoping to earn the hand of Maid Marion and salvage the village, Robin assembles a gang whose lethal mercenary skills are matched only by its appetite for life. Together, they begin preying on the indulgent upper class to correct injustices under the sheriff (Movie details: Golden Village website)."

This is a 2 hours 20 minutes show. The movie plot was average and it portrayed the early life of "Robin Longstride". The visual effects were good. I like the battle scenes as they looked realistic. Russell Crowe is definitely a heavy weight actor and his performance was great. But, I find Russell is not suitable to play the role of "Robin Hood" as he looks a bit old for this. I still prefer Russell's previous role as Maximus in "Gladiator". Anyway, the movie was entertaining and my overall rating is 3/5.
Posted by deSMOnd

I watched the movie last week too and I like medieval stuff, mainly because of the horses! :D

Overall it's a nice movie to watch for the actions and costumes. Story line is still ok.

My main gripe is that the lead actor's image is not what I envision Robin Hood to look like. I prefer a younger and dashing actor for the lead role! :P

I agree with you, Juliana..Haha!!