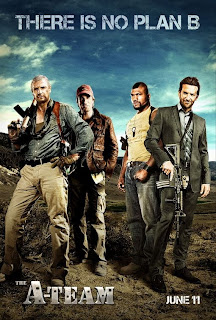 "THE A-TEAM follows the exciting and daring exploits of a colorful team of former Special Forces soldiers who were set up for a crime they did not commit.

Going "rogue", they utilize their unique talents to try and clear their names and find the true culprit (Movie Details: Golden Village website)."

"The A-Team" was a fast paced adventure film. It had tons of action. The plot was fairly predictable. The visual effects were good with lots of gunshots and explosion. Some action scenes were not realistic but who cares – it was entertaining and hilarious after all. Liam Neeson is the right actor to play the role of Hannibal and his acting was excellent without a doubt. The performance of Bradley Cooper (as Faceman) and Sharlto Copley (as Murdock) was great as well. As for the role of B.A. Baracus (played by Quinton Jackson), I prefer Mr. T as he just got that "bad" look. Besides, learned to know the reason why B.A. had fear of flight was very fun. The chemistry between them was good. Overall, I enjoyed the movie and my rating here is 3/5.
Posted by deSMOnd

Yup, a movie with full of actions!!

Yes Jason, at least for this movie. In real world, there are always few options to choose.