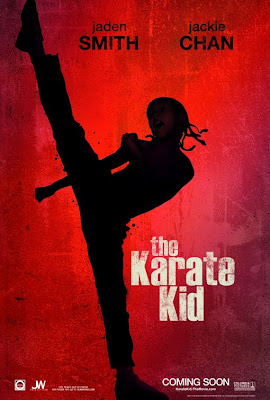 "In Columbia Pictures' The Karate Kid, 12-year-old Dre Parker (Jaden Smith) could've been the most popular kid in Detroit, but his mother's (Taraji P. Henson) latest career move has landed him in China. Dre immediately falls for his classmate Mei Ying and the feeling is mutual but cultural differences make such a friendship impossible. Even worse, Dre's feelings make an enemy of the class bully, and kung fu prodigy, Cheng. With no friends in a strange land, Dre has nowhere to turn but maintenance man Mr. Han (Jackie Chan), who is secretly a master of kung fu. As Han teaches Dre that kung fu is not about punches and parries, but maturity and calm, Dre realizes that facing down the bullies will be the fight of his life (Movie Details: Golden Village website)."

The film was great as it covered action, drama, romance and comedy. The story line was a bit similar to the original but way better and more realistic. It was also easy to understand. There were a lot of emotional scenes and action in this movie was secondary to me. Besides good acting performance from Jackie and Jaden, they had great chemistry. The shots of China scenery were breathtaking especially the scene where Jackie brought Jaden to the top of the mountain. I also like Jaden's martial arts training as it was fun and humorous. Seeing Jackie in a serious role with feeling and depth rather than his usual comical role was refreshing, and I was impressed. The only thing seems a bit weird to me is Jaden was a little young to fall in love with the girl. Anyway, Jaden has a lot of potential in future. Lastly, the movie title should be named "The Kung Fu Kid" as Jaden learned Chinese martial arts (kung fu) from Jackie and not Karate. The movie is suitable for audience of all ages and I highly recommend it to all of you out there. I will be getting the DVD in future and my overall movie rating is 3.5/5.
Posted by deSMOnd

The movie title is wrong. Should be Kung Fu and not karata. Maybe they should add he learn Wingchun also and his master is IPman. :P

Yes Leon, the title should be "The Kung Fu Kid" since Jaden learned martial arts from Jackie. Anyway, this movie is worth watching :)

I think the producers wanted to leverage on the success of "The Karate Kid". The storyline is similar but set in different time periods and countries, & with different characters.

Overall it's a very nice & touching movie to watch. Jaden Smith acted very well in the lead role, expecially in the scenes where his character gets hurt in the fights!

Yes Juliana, Jaden Smith is a very well trained actor just like his father Will Smith. This movie is good to watch :)

agreed with you desmond, i just watched it few hours ago! i am very enjoyed for this movie~ CHINA! jaden smith is a good actor as his dad will smith.

Jason, it's great that we share the same views on this movie and I will buy the dvd in future :)

been meaning to watch this movie.
Sound like a fun movie.

I don't if this is nice but I sure like the original Karate kid with Mr Miyagi as the master. I don't think any remake could surpass. Just my opinion. Hee! Hee!

Anyway, I watched 'Nightmare on Elm Street' instead.

Yes Asrul, the movie is worth watching and I am sure you will love it :)

Dennis, I think the movie title is very misleading as Jaden learned kung fu instead of karate. The story line is a little bit similar but definitely not a remake of karate kid. I highly recommend you to watch. It's a very nice show with lots of emotions and some parts were touching :)

it is a good show. if jaden able to speak Chinese in this show, that would be another selling point. i think Material Art & Kung Fu are too common for many past movies. therefore, the producers adopted Karate rather than the other 2.

Wayne, perhaps you are right about the movie title. To me, I prefer Jaden to speak English just like what they did in the movie. It was humorous with lots of fun when watching the show :)