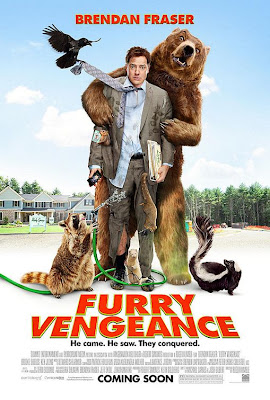 "FURRY VENGEANCE is a live action family comedy in which an ambitious young real estate developer, Dan Sanders, faces off with a band of angry animals when his new housing subdivision pushes too far into a pristine part of the wilderness.

Led by an incredibly clever raccoon, the animals stymie the development and teach our hero about the environmental consequences of mans encroachment on nature (Movie Details: Golden Village website)."

I guess it was a low-budget film as the visual effects were not that good. Some of the scenes were not convincing at all. I was bored for the entire movie as the plot and jokes were lame. One thing I don’t understand is why Brendan Fraser took up such role. Anyway, the movie is for all ages. Go to watch it if you really need a good laugh. You may also bring your kids along as I believe most of them will love it (Overall Movie Rating: 2/5).
Posted by deSMOnd

It's another movie about the animals of mother nature vs the invasion of the property developers.

The issue with such themes is that no one will take the topic seriously and people will continue to clear forests for buildings.

In short, it's a lost cause for the earth and our future generations :(

Dennis, not really lousy. It's still hilarious and kids definitely like it :)

Juliana, it's beyond our control and let our future generations worry about that. I am sure I don't live so long too..Not my problem anymore!! Hahaha..