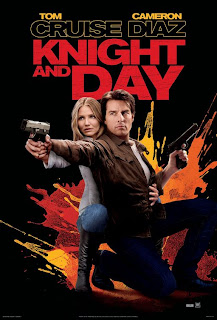 "Tom Cruise and Cameron Diaz star in the action-comedy "Knight & Day". During their glamorous and sometimes deadly adventure, nothing and no one - even the now fugitive couple - are what they seem. Amid shifting alliances and unexpected betrayals, they race across the globe, with their survival ultimately hinging on the battle of truth versus trust (Movie Plot: Yahoo! Movies Singapore)."

"Knight and Day" was a fast paced movie with lots of action and comedy. The plot was a bit weak but the acting of Tom Cruise and Cameron Diaz was good. Cruise is still a good looking man and he had great chemistry with Diaz. The scenery in the movie was beautiful especially the town in Austria. Car chase and bull chase were not surprised to me as there were similar scenes in other movies. Some parts of the plot were not convincing for instance, it did not show how the lead actors managed to escape from the island. The ending was fairly predictable too. Overall, the movie was enjoyable and it deserves a rating of 3 out of 5.
Posted by deSMOnd