Prince of Persia - The Sands of Time 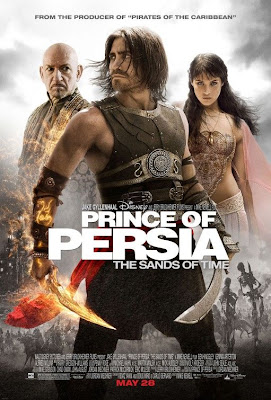 "From the team that brought the Pirates of the Caribbean trilogy to the big screen, Walt Disney Pictures and Jerry Bruckheimer Films present PRINCE OF PERSIA: THE SANDS OF TIME, an epic action-adventure set in the mystical lands of Persia.

A rogue prince (JAKE GYLLENHAAL) reluctantly joins forces with a mysterious princess (GEMMA ARTERTON) and together, they race against dark forces to safeguard an ancient dagger capable of releasing the Sands of Time, a gift from the gods that can reverse time and allow its possessor to rule the world (Movie Details: Golden Village website)."

It was a two hours adventure film. The story line was average and it had some twists in the middle and ending. There were lots of action scenes with good visual effects. But there was no chemistry between Prince Dastan (played by Jake Gyllenhaal) and Princess Tamina (played by Gemma Arterton). I just feel something was lacking but don't know what was that. I was bored at certain parts of the story but I enjoyed when the guards were chasing Prince Dastan around the market place. I also like the English actress "Arterton" as she is hot and got a sexy lips. Nothing great about Gyllenhaal and I personally think he was not the right one to play the role of Prince Dastan. Anyway, the movie is suitable for all ages and my overall rating is 2.5/5.
Posted by deSMOnd

I saw this movie this week. The pace was like taking a roller coaster ride, filled mostly with fast action scenes playing like a computer game.

I agree that the lead actress is attractive (she reminds me of actress Alessandra Martines from Fantaghiro).

The male lead could have gone to a younger and more dashing actor, same as the case for the recent Robin Hood movie.

Overall, it's a movie to watch for the action scenes, and if you like stories set in ancient Persia!

Juliana, thanks for your review on the movie too. I agree most of your statement here :)

I guess the movie had to at least connect to the fans of the games. Personally it doesn't interest me to watch the movie. However desmond thanks for sharing to reassure my gut feeling is correct.LOL

Leon, don't mention it. I just speak out what I feel :)

Not sure I will watch his movie derived from game. Since you give it a marginal rating, I will probably wait for dvd rental.

Dennis, don't believe me so much as different people got different opinions. Perhaps you may like it..Hahha!!