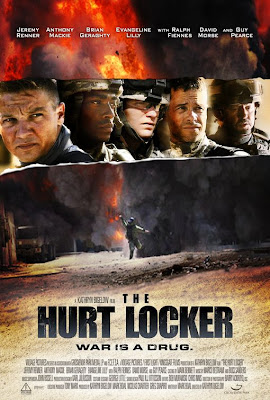 "The Hurt Locker is an intense portrayal of elite soldiers who have one of the most dangerous jobs in the world - disarming bombs in the heat of combat. When a new sergeant, James takes over a highly trained bomb disposal team amidst violent conflict, he surprises his two subordinates, Sanborn and Eldridge by recklessly plunging them into a deadly game of urban combat. As the men struggle to control their wild new leader, the city explodes into chaos, and James true character reveals itself in a way that will change each man forever (Plot extracted from Golden Village website)."

The following is not my movie review and I just want to express my feeling after watching the film. I felt that why can't we people live in perfect harmony...why can't we stay out of other nation's internal affairs and fix our own problem first. Is "Power" so important nowadays?? Come on...we are facing global financial crisis and disasters happened everywhere. Can't we have better thing to do rather than going on wars??

It is a two hours film. There were many scenes that made my heart beating fast especially when the bomb disposal expert, James were searching for bombs on the street. The film also gives a good description of life on those elite soldiers posted to the middle east. I should say this is a great film and my overall movie rating for this one is 3/5.
Posted by deSMOnd

Envy you. Have the luxury for movie weekly.

War is a drug

Bro, spending 20 dollars per week on movie is the cheapest and only entertainment I can have. Didn't play pool and pubbing nowadays. I also don't spend on clothes (except toys and DVD). Alamak! your spending on Macross and Gundam is more expensive than mine...Haha!!

Jason - Wars to certain people are drug to them but most of us hate wars as million of innocent people died during the wars..

not yet screened here in Malaysia...

In this case, you gotta wait :P