Alvin and the Chipmunks 2 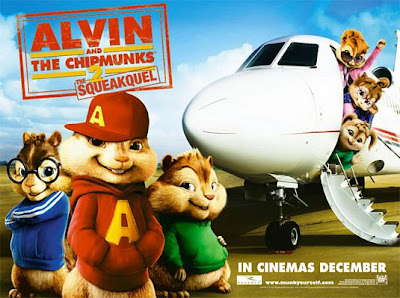 "In the Squeakquel, pop sensations Alvin, Simon and Theodore end up in the care
of Dave Sevilles twenty-something nephew Toby (Zachary Levi). The boys must
put aside music superstardom to return to school, and are tasked with saving the
schools music program by winning the $25,000 prize in a battle of the bands. But
the Chipmunks unexpectedly meet their match in three singing chipmunks known
as The Chipettes - Brittany, Eleanor and Jeanette. Romantic and musical sparks
are ignited when the Chipmunks and Chipettes square off (Movie Details extracted
from Golden Village website)."

The movie is definitely suitable for all ages. I found the plot was still "average" even
if the Chipettes were included in the story. Not much music performance done by
the chipmunks as compared to the first movie. In addition, Jason Lee's character
"Dave" had only fewer screen time in this sequel and that's why his nephew Toby
(played by Zachary Levi) came into the picture. Overall, the movie was hilarious
and enjoyable especially to the kids. So, bring your kids along if you are going to
watch it and my movie rating for this one is 2.5/5.
Posted by deSMOnd

so, any good? this movie?

This is a movie for any aged group. It's fun and enjoyable. But there is no much songs sang by the chipmunks this time round. Still can bring your kids to watch :)

cool, defintely going to take my children to watch it :)