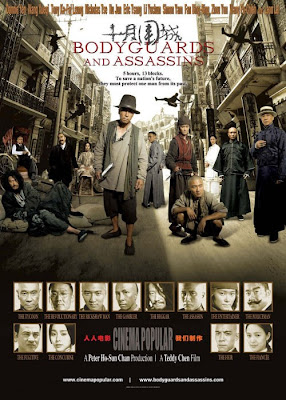 "1905, City of Victoria (British Colony of Hong Kong). Before Dr. Sun Yat-Sen became the Father of Modern China by instigating the revolution of 1911 that overturned the Qing Dynasty, his life was almost cut short when he arrived in Hong Kong for a secret meeting to establish a united anti-Qing revolutionary front. Whilst he only had to travel the distance of thirteen blocks, Dr. Sun Yat-Sen had to survive relentless attempts on his life with only five bodyguards, a group of ordinary men and women against hundreds of assassins. These men must put their courage to the test in order to protect the hope of millions even if it meant fighting to the death...(Movie Synopsis: Far East Films)"

This is a great movie with well balanced of emotional and action scenes. Great performance by all heavy weight actors like Wang Xueqi and Tony Leung, etc. I should mention the actor with great improvement is Nicholas Tse. As the story focused more to the history of revolution in China, do not expect more action from martial arts superstar "Donnie Yen". Of coarse, I like the fighting and chasing scenes between Donnie Yen and one of the assassins. I personally think that was the great action part of the movie. The ending was expected as all bodyguards and assassins died. I guess "Revolution" is all about "Sacrificed". Anyway, I enjoyed the movie and my overall rating is 3.5/5.
Posted by deSMOnd

Great casts! I will watch this movie. Thx for the review! 聖誕快樂! Merry Christmas!

This looks good and a merry xmas to you too, Dennis!

Leon, thanks for your info. I am watching it later..

Merry Greetings to you! I'll be watching this movie today :D

Juliana, Merry X'mas to you and enjoy watching the movie :P