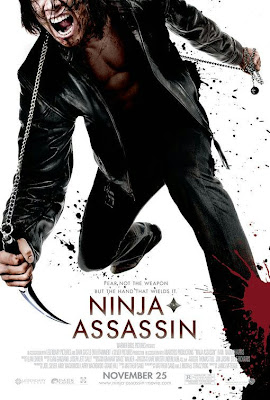 "Trained in methods of killing from an early age, Raizo (Rain) is a member of the secret clan of assassins known as the Ozunu. After the Ozunu kill his friend, however, Raizo breaks free from them and vanishes. Meanwhile, Interpol agent Mika Coretti (Naomie Harris) discovers a money trail linking the the group to murders. Raizo saves Mika from his former comrades and joins forces with her to bring down the Ozunu forever (Movie Overview: Fandango)."

"Ninja Assassin" is a bloody and violence movie with lots of fast paced martial arts action. Since this is a Ninja movie, the story line is not important to me and action is my priority. But I was disappointed with the fighting scenes as most of them happened in the dark, making it very hard to see what was going on during the fights..What a waste!! Otherwise, the action would have been great if the lightings were properly setup. Anyway, the movie was entertaining and I still would get it on DVD in the future (Overall Movie Rating: 3/5).
Posted by deSMOnd

the action sequences are great!

Yes, the action sequences are great but couldn't see clearly during the fights..a bit wasted!!