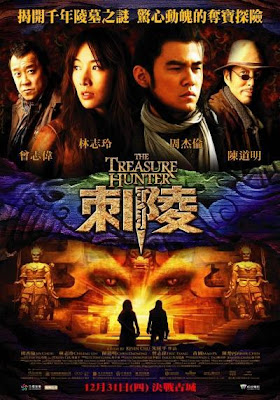 "In the northwest desert where countless prosperous dynasties have flourish and fallen, there is rumour of a buried treasure of unbelievable riches. A group of mysterious guardians have kept the map to the location of the treasure safe, until a fierce rivalry erupts. A notorious international crime group, The Company hunt down the map keepers and before they manage to secure it, the keeper passes the map to a young chivalrous man Ciao Fei (Jay Chou). Ciao Fei is forced to give up the map to save the live of his mentors daughter Lan Ting (Lin Chi Ling). Teaming up with Hua Ding Bang (a famous archaeologist) and Lan Ting they embark on a dangerous journey to recover the map and fight to protect the ancient treasure (Movie Details: Golden Village website)."

It was a lousy movie and worse than what I expected in the first place. The acting skills of Jay Chou and Chi-ling were weak. No "chemistry" between the two main leads. Both of them didn't look like couple and they were like "sister and brother". I also confused about the love triangle between Jay Chou and the other two actors. There was a lot of unnecessary stuff added in to drag on the 100 minutes story line. As the plot was lacking and lame, a lot of audience like myself fell asleep during the show. For action and special effects, they were "so so" only. Overall, a total let down!! (Movie Rating: 1.5/5).
Posted by deSMOnd

Sounds like a 'rip-off' of National Treasure (Nicholas Cage) to me? Heheh....correct me if I'm wrong here Des!

Ya Rebel, something like that but this film is bad. National Treasure is much much better..

You seldom give movies such low rating. I guess this must be a really sucky one! Good thing I spent my money on Avatar 3D instead.

Yes bro, this movie sucks!! Glad that you watched Avatar in 3D. I watched in 2D as not very used to 3D glasses :)