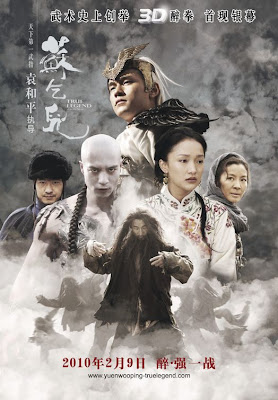 "After a rescue mission, Su Chan (Vincent Zhao Wen Zhuo), a successful bodyguard who works for the Royal family yearns to leave the army in pursuit of something he loves rather than a high post with the government. In the true spirit of a martial-arts practitioner, Su Chan hopes to impart his skills to others and also live in peace with his wife, Yuan Ying (Zhou Xun) and son. But his happiness is short-lived when Ying’s brother, Yuan Lie (Andy On) returns to avenge his father’s who was killed by Su Chan’s father 18 years ago, an act that shattered the life of Su Chan forever (Movie Plot: Moviexculsive.Com)."

“True Legend” is another martial arts masterpiece directed by Yuen Woo Ping. The movie plot is average as more or least the same kind of story line we had seen in "Fearless". All the fighting scenes are fast and fierce. As Vincent Zhao is a real life martial artist, his martial arts moves are very realistic. On the other hand, the performance of the villain played by Andy On was very impressive too, especially with his evil expressions all the time. We also see no action from Michelle Yeoh as she is a guest star in the film. As for Jay Chou, he has a lot of potential in the martial arts aspect. Overall, I enjoyed the movie very much and highly recommend if you are a lover of martial arts movies (Movie Rating: 3.5/5).
Posted by deSMOnd

If you want a purely kung fu movie, this is the one. Storm Warriors martial arts are purely comic style. We can't compare both of the movies. They have their own credit points and weak points :)

Agrees. Storm Warriors based on sword with technology while True Legend is most on kung fu.

Man, I thought True Legend was truly dreadful. The story/plot is ridiculous and the fight scenes aren't Yuen Wo Ping's best either.

Kenny, the plot is not that good but talking about martial arts styles and moves in this movie, they are very fierce and fast. You can watch it :P