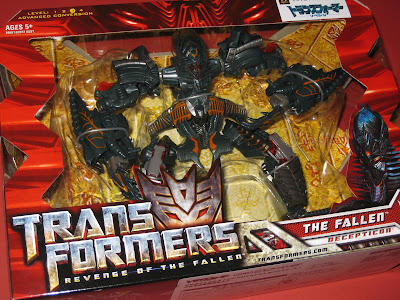 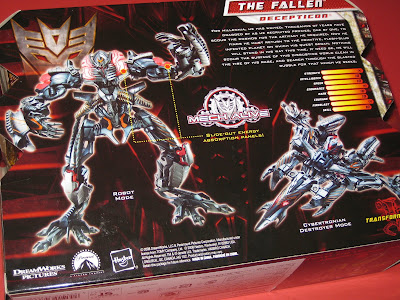 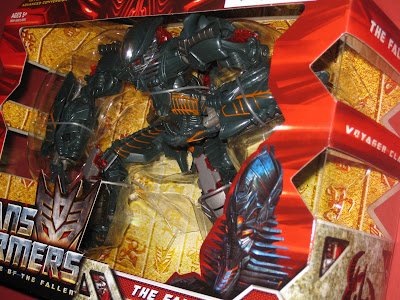 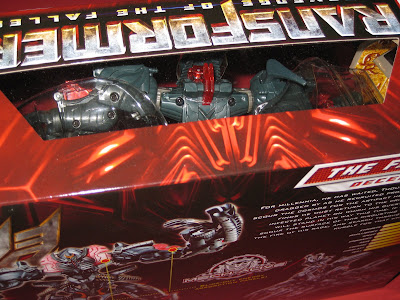 When collecting the voyager class Fallen from TFH, this was the last piece left in the carton box. The voyager Fallen is really popular and I heard people are now selling them at S$75 each even in Hasbro version. Really crazy!! The only difference between the Hasbro version and Takara version is the placement of two pink colour energy absorption panels beside the head. For Hasbro version, we can see both panels are revealed beside the head and this is what the picture shows in the box. Whereas for Takara version, both panels were folded and hidden behind the head (please refer to 3rd and 4th pictures above). Anyway, I am not taking the figure out of the box now as I think it looks nice in sealed box. For transformation of the Fallen, you may view Optibotimus Video here.
Posted by deSMOnd

Pity. If I get my hands on your the fallen, I will OPEN THE TOY for you for sure to review! XD

This is definitely THE ROTF toy to watch out for....I was lucky to have bought this during TRU's morning launch some time ago.....

Not much different between Takara and Hasbro within the ROTF line...I just wished they had made him in Leader Class!!

Is he that rare? I saw a bunch of him at my local Walmart last week lol

I was so looking forward to seeing your Fallen review out of box :P

Maybe I get my own Fallen and let you and LEon review it for me. You both do a much better job than my boring photos :)

ROTF Voyager Fallen is quite hard to find in Singapore. My scouts found a convoy of them this week. They must have landed in Singapore under the 'cover' of the eclipse :P

But the Fallen bounty hunters were waiting for them. I believe most of The Fallens got 'trapped' and hauled away by now, LOL :D

Btw, just a note I found about getting a ROTF Voyager Fallen - make sure your Fallen comes with his TAIL, which is packaged against his back when MIB. The tail will also form his cockpit in jet mode. Some Fallens found overseas came without their tails and the buyers had to return them to the stores to exchange or refund etc...

Leon, I will take out some time later :P

Rebel, I also wish Hasbro can make the leader class Fallen as its height and size is similar to Optimus.

Jcee, The Fallen is not rare but popular. There are huge demand for these figures in Singapore.

Juliana, I am not that good in writing review but can help in taking pictures. I highly recommend Leon to write review if you need helps..Anyway, thanks for your compliments..Haha!!

Juliana, I have checked my Fallen and he comes with his "tail". So, no problem to mine. Many thanks for letting me know this :)

You're welcome! My friend told me this info :)

Btw, I found out that Taka atrium is having a toy clearance sale now! Got TFTM toys like Battle Scenes going for a song there! Must check it out, go, go, go! :D

Juliana, thanks for the heads up!! I will go to check it out if I am free this weekend :P

@Juliana
I'm blushing. My photography is not professional enough as I am still taking it from a 3.2 Megapixel camera some more... I can only afford to do so on weekend.

@desmond
Bro, your style of reviewing with photos are interesting enough to keep me coming to read your blog.

Leon, you are humble man :D